It’s always good to have a few cheat’s recipes up your sleeve just in case you’re really short of time. Obviously a jelly does take a few hours to set but when it comes to the actual preparation time it’s just a matter of minutes, especially if you take a short cut and use bought cordial.

I should really be ashamed to be using commercial elderflower cordial when, with the blossom at its prime, every self-respecting food blogger is writing about their own home-bottled stuff but hey, this is meant to be a minimum effort/maximum impact pud. And, there’s nothing to stop you using your own cordial if you like ( I’m peed off as I was planning to harvest some blossom today, a bit late I know, and now it’s rained washing away all the fragrance).

Jellies are very “in” at the moment, just take a look at the feats of the fabulously eccentric partnership Bompas and Parr. Our fascination with jelly is nothing new, the Victorians created some  extraordinarily fancy jellies. My take on these fabulous puddings is much simpler, but certainly a step above the Mr Chivers variety, that I have to admit, I loved as a child (especially if I managed to sneak a couple of the rubbery squares of super-sweet gelatin straight from the box).

The beauty of using elderflower, or any other clear liquid, is that the fruit or flowers are magnified, and once turned out the jelly looks rather like those paper weights people used to have with dandelion clocks or scorpions lurking inside. Back in the ’70’s my sister and I created dozens of these very attractive ornaments for relatives with a wondrous kit called Plasticraft (I’m sure it must have been banned, glue sniffing would probably have been safer, the noxious fumes left you light headed for hours). Now back to the jelly; the secret is to build it in layers as the berries or flowers will always float to the surface of the liquid so if you fling it all in at once you don’t get the fabulous suspended look.

Leaf gelatine is a wonder ingredient, it makes creating a jelly an absolute doddle. I do use a little less gelatin than the manufacturers advise, there’s nothing worse than rubbery jelly, so I tend to down it by about a 1/4. If in doubt start with setting your jellies in glasses and move on to turning out once you’ve cracked it. There are vegetarian jelly crystals out there too, but I’ve never been quite so excited about the texture. 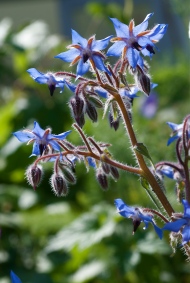 Check the capacity of your moulds or glasses. I love the Basque wine/cider glasses I’ve used in the picture but you might use little metal timbale or dariole moulds and turn the jelly out. I needed 1.2 litres of liquid in total.

Now make up that quantity of an intense dilution of your cordial, rather sweeter and stronger than you would drink.

Calculate how many sheets of gelatine you require. I’m not giving you the quantities here as different brands seem to have different size leaves (and I always reduce the gelatin to liquid ratio a little). Put your sheets of gelatin into a bowl of cold water to soften.

Meanwhile heat up about 200 ml of the cordial mixture, or enough to melt the gelatin in. Squeeze the excess water from the rubbery sheets and add them to the very hot (but not boiling liquid) Stir the liquid until all the gelatin has completely disappeared and add this to the rest of your cordial mix. Give it a stir, and your done, your jelly is ready to set.

Fill your glasses or moulds to about a 1/3rd full and drop in some fruit or flowers. Do think which way you will be serving the jelly, so that your flowers are the right way up. Put the moulds in the fridge to set and keep the remaining jelly at room temperature.

Once the jelly is just set (after an hour or 2) you can pour on another 1/3rd of the room temperature  runny stuff and sprinkle in some more fruit. Leave to set again and finally finish with the remaining jelly. This may all seem like a faff but honestly it’s quick and easy. And, if that is all too much like hard work just mix the fruit and jelly together and set in one go, it just won’t have that paperweight quality.

Leave the jellies to completely set, I like to allow about 5 hours and then either serve in the glasses or dip the moulds into hot water for just long enough to melt the outer edge and turn out. Oh yes, and look what mysteriously happened to my borage flowers, a vision in Barbie pink, it must have been the acidity.

Giant jelly to feed a crowd 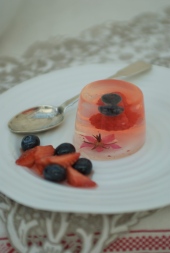 Make a huge jelly for a crowd. You don’t need an elaborate mould just a mixing bowl will do as the fruit will look more dramatic in a simple shape.

I’m a fan of (don’t work for!) Bottlegreen and lots of the great cordials they make, so don’t just stop at elderflower. A ginger & lemongrass jelly makes a great follow up to a Thai or Oriental meal and the pomegranate and elderflower makes a delicately blushing pink jelly. So cheat away.

For maximum impact use whole berries and flowers rather than chopped fruit. I once made miniature jellies with a cape gooseberry in each – mistake, they looked like set, raw eggs.

At last a chance to cook up one of my favourite combinations. Lovely Kate gave me a huge pile of rhubarb from her garden a couple of days ago and the slightly milder weather has lured back the mackerel, they virtually jumped off the slab at the fishmonger’s this morning. So dinner was decided in a moment.

I medium mackerel per person, gutted and trimmed of fins
A splash of rapeseed oil
salt and pepper

Pre-heat the oven or grill to its highest setting. Line your tray with a bit of foil, to save on washing up later, & then splash on the oil. Turn the fish in the oil and then season. Set the fish aside whilst you get the sauce done.

This sauce is a cinch.  Just fry the shallot, ginger, chilli and star anise for about 10 minutes until slightly golden and very fragrant. Add the rhubarb, orange juice, sugar and a splash of Tamari. Simmer gently until the rhubarb is soft but still intact. If you do have a disaster and the rhubarb collapses into a stringy mess then it’s best to puree the sauce completely. Balance the sauce with more sugar or Tamari if necessary.

Cook the mackerel in the oven or under the grill until just cooked through and coming away from the bone. We had new potatoes and a fresh green salad with ours this evening. Very, very nice indeed.

The sauce is also stunning with pork belly and I’m up for trying it with roast duck next time around.

I still had mounds of rhubarb and decided to make some cordial. I wasn’t expecting the fabulous girly-pink juice that I’ve seen in magazines since most of the sticks were rather green (and no Kate, I am NOT complaining). But, I have to admit to being pretty chuffed with the stunning peachy-pink of my cordial, which is good news since I think that boiling up the expensive, early forced rhubarb really would be too much of an extravagance.

I’ve tinkered with my recipe a little because the cordial could do with being a a bit more intense. It really only worked at a 50/50 dilution so I’ve cut down on the water in my recipe below. So yours could come out an even more amazing colour.

Fling everything in the pan and simmer until the rhubarb has just collapsed and looks rather slimy and revolting.

Strain the rhubarb mixture through a sieve and resist from stirring, prodding and squashing (or you will end up with a cloudy syrup). The cordial will drip through slowly. You could leave it to strain in the fridge overnight if you have room. I never do, my fridge is a nightmare; an avalanche just waiting to happen.

Bottle the cordial, keep in the fridge and use within a week. If you really do have a massive rhubarb crop on your hands you could stir in about a tablespoon of citric acid (available from shops that sell home-brewing kit) to the rhubarb just before straining  and then you’ll be able to keep it for months. It’s delicious with some stem ginger syrup added too.

Try your cordial with:

Fizzy water and fresh mint. With Prosecco, an English spin on the Harry’s Bar Bellini. With a shot of vanilla vodka (recipe to come at a later date) Or make a jelly…see below

And the leftover rhubarb mush

The rather unattractive sludge left in your sieve is fantastic stirred into some Greek yoghurt for breakfast. You could even layer it in a glass with some cream/custard and crumbled ginger nuts for a simple supper dessert.

Rhubarb Jelly is fabulous using your cordial. Check the size of your dariole moulds, rabbit, racing car, other jelly moulds or perhaps you’re just using glasses. Fill up the mould with water and tip into your measuring jug and multiply by however many you’re making. Take enough sheets of gelatine to set said amount of liquid and place them in a bowl of cold water to soak.

Remember not to dilute the cordial too much, your jelly needs to be much sweeter and stronger tasting than a drink would be. Heat up about 1/4 of your diluted cordial. Remove the floppy sheets of gelatine from their water, give them a squeeze and then add to the hot liquid. They’ll dissolve in an instant. Add the remaining liquid for your jelly and tip into the moulds. Leave for a few hours to set.

Dip the jelly moulds into some hot water, just for as few seconds, and turn out onto plates.