Today’s recipe is cheap to make, has very few ingredients and only takes about 20 minutes from start to finish. It’s also one of those dishes that seems to taste so much better than it ought to; the whole, quite simply is, better than the sum of its parts. 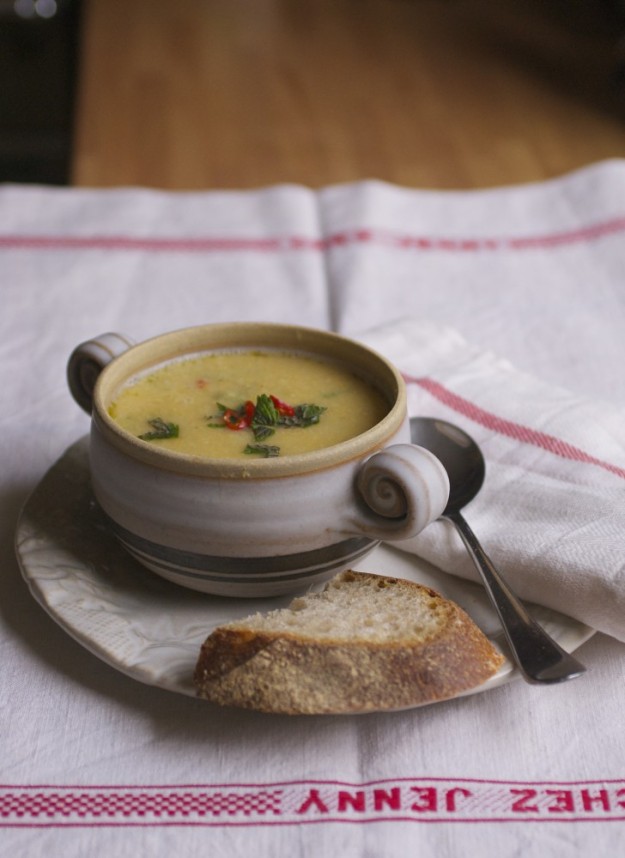 I’ve chosen this fabulous soup recipe for a couple of very good reasons. As you know if you’re a regular reader of my blog, I am rather obsessed with pulses, chickpeas in particular. Secondly I’ve been challenged by the guys at The Hunger Project to come up with a supper recipe that costs under 33 pence per serving to tie in with World Hunger Day on 28th May. This part of the My Voucher Code World Hunger Campaign – you can take a look and see if you’d like to get involved too.

I have to say that I am constantly badgered by emails asking me to support “Days” and quite frankly most of them annoy the hell out of me. So someone just decided that we should have a “National Sandwich Week”, a “World Doughnut Day” (yes it does exist!) or worse still “Happiness Day” (for God’s sake what happens if your dog’s died or you’ve just received a parking ticket?- it’s ridiculous) However, (rant over), I do concede that there are a few of these “Days ” that can help raise awareness about much bigger issues and, of course World Hunger Day is one of them. You can find more out about the aims and achievements of The Hunger Project in some truly inspiring stories on their website.

The 33p price tag per portion does rely on you buying your chillis and mint from a local greengrocer or an Asian/Middle Eastern store (where you’ll undoubtedly do better than those silly little, extortionately priced, supermarket packets). You can use any left overs in an equally economical ginger masoor (red lentil) dal 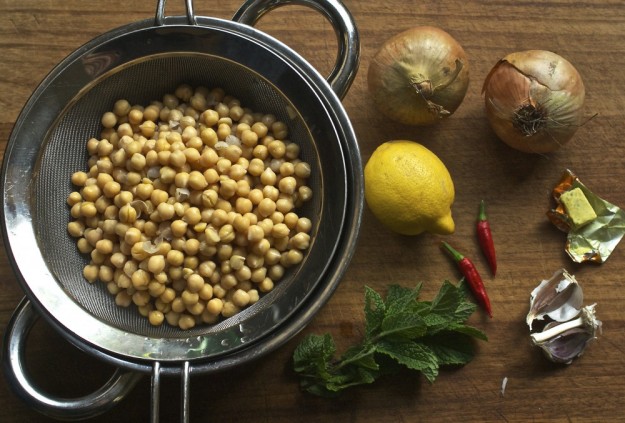 You can blend this with a stick blender in the pan if you want to keep the washing up to a minimum, but if you do have the time this becomes beautifully silky and creamy when well whizzed in a blender.

Take a large saucepan and fry the onion in the olive oil until golden.

Add the garlic and the chilli then, as soon as you can really smell the sizzling garlic, throw in the chickpeas and the stock.

Simmer for about 10 minutes and then blitz the soup with a stick blender for convenience or, for a smoother result, use a blender.

Taste. The soup will seem rather bland, don’t worry the salt, plenty of zippy lemon juice and the fresh mint will work wonders. Season the soup well and serve.

How about?
Toasting a bit of yesterday’s bread and putting it in the bottom of your soup bowl. Allow the bread to soak up the soup and collapse into a tasty and satisfying gloop – great if you’re really hungry, this also makes the dish a fully balanced, protein-rich meal.

Adding lime juice and coriander instead of lemon juice and mint.

And just a word about the rather twee “Chez Jenny” tablecloth in the finished soup picture – it’s actually one of those ancient roller towels. It’s old and authentic, it just happened to have my name on it. I found it in The Cloth Shop  in Notting Hill, London.
Come on, if there’d been one with your name on it, you wouldn’t have been able to resist either! 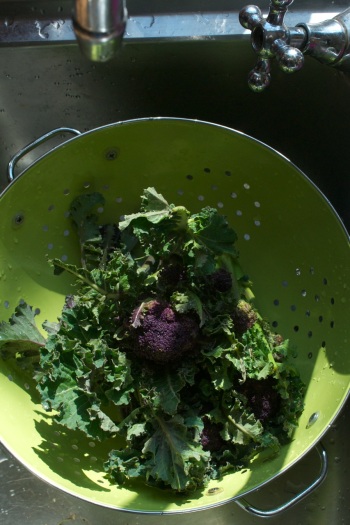 The first veg box has arrived. I’ve been umming and ahing for years about getting one. It’s just that I always plan to scour farmer’s markets and local shops for my seasonal produce, but have finally faced up to the fact that I usually end up in the supermarket. I’ll still pop up the road to the fabulous Reg the Veg for extra bits and pieces but from now on it’s the surprise element of my weekly box that will dictate what I cook (and sometimes write about).

So, amongst all the other fabulous veggies, this week’s highlight –  purple sprouting.  I love the stuff, it’s so much tastier than the green Calabrese broccoli they sell everywhere month in month out. It seems mad that a few decades ago purple sprouting broccoli was the British norm and the Italian import was considered rather exotic.

The sun shone today, it actually felt like we might be leaving the sub zero weather behind at last and so I got over excited and cooked up a rather summery feeling dish. I wanted my sprouting to play centre stage and so I opted for pasta. Italians love to cook broccoli and cauliflower with chilli and garlic, and perhaps it was the sunshine that had me feeling nostalgic about summer holidays and fiery bowls of spaghetti alio e olio. Spaghetti with oil, lashings of garlic and a good dose of chilli is about as cheap and basic as a bowl of pasta can get, but I became addicted on last year’s holiday in Calabria. (Highlights: the stunning old town of Tropea, the Aeolian islands and amazing food all round. Low point: JoJo getting a jelly fish stuck down his swimming trunks.)

But, back to the pasta. You could add all sorts of other bits to this dish such as toasted pine kernels, capers, salted anchovies or sun blush tomatoes (the juicy semi-dried ones) but I love its simplicity. You really don’t need parmesan, the crispy breadcrumbs are often referred to as poor man’s parmesan in any case. And, if pasta’s not your thing then just try this dish with butter beans instead. 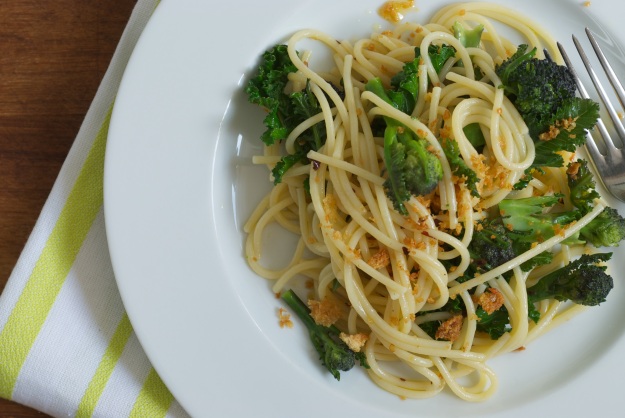 Trim any tough stalks from the sprouting (the guinea pigs are in heaven) but keep all those delicious leaves. Give it a rinse.

Toss the breadcrumbs around in the olive oil and roast on a tray for around 10 minutes in a hot oven (200c ish) until throughly crisp and golden. You can toast up a double quantity and keep some in a jar for a few days too (they add a good bit of crunch to a salad)

Throw the garlic and chilli into a small pan with the cold extra virgin oil and heat through really slowly so that the garlic flavour infuses the oil. Whip it off the heat as soon as the garlic begins to colour, it will continue to cook for a minute or two. You want to finish up with glorious gold rather than burnt brown. Set the oil aside (do it ahead if you feel like it).

Cook the pasta in plenty of salted boiling water until al dente and steam or boil the sprouting for a matter of minutes until just tender. (I have a steamer that fits perfectly on top of my pasta pan.)

Now it’s just a question of tossing the drained pasta in the wickedly fiery garlic oil and then carefully rolling in the purple sprouting. Sprinkle over the breadcrumbs and serve. 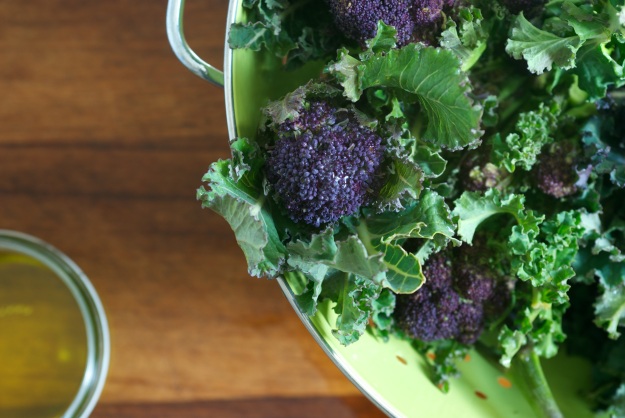 Other Wonderful Ways with Purple Sprouting

Classic anchovy dressing – Pound about 6 salted anchovy fillets together with the juice of half a lemon, about 3 tablespoons of extra virgin olive oil and plenty of freshly ground black pepper. Steam or boil about 500 g of sprouting. Drain and toss in the oil. Sublime alongside lamb.

Try going down the Oriental route – Steam or boil about 500 g of sprouting until just tender and then refresh in cold water. Stir fry about a teaspoon of chopped garlic, a teaspoon of chopped ginger and a couple of finely diced chillis in a splash of vegetable oil until fabulously fragrant. Toss in a tablespoon of fermented black beans along with the sprouting, stir to heat through and serve. 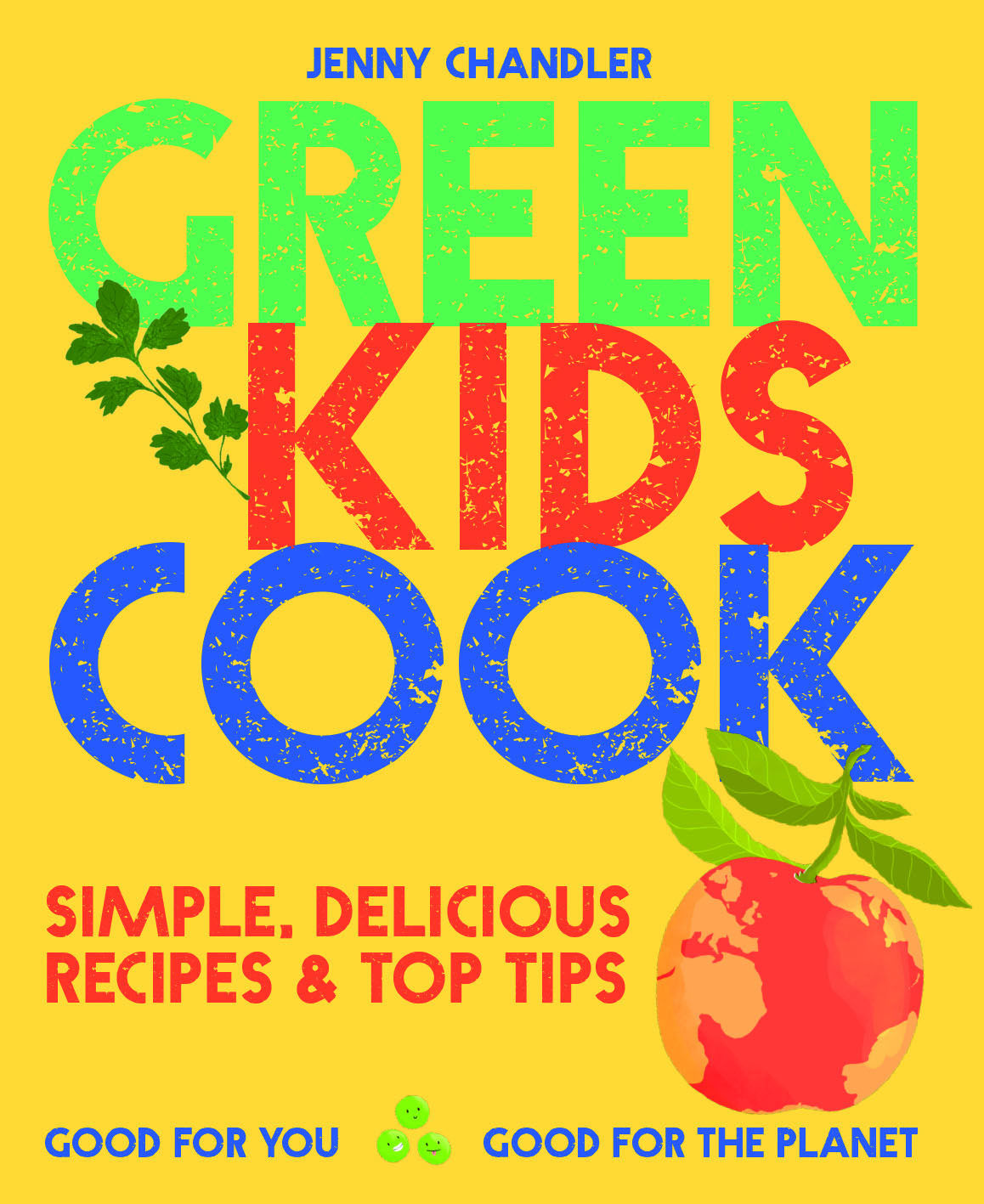 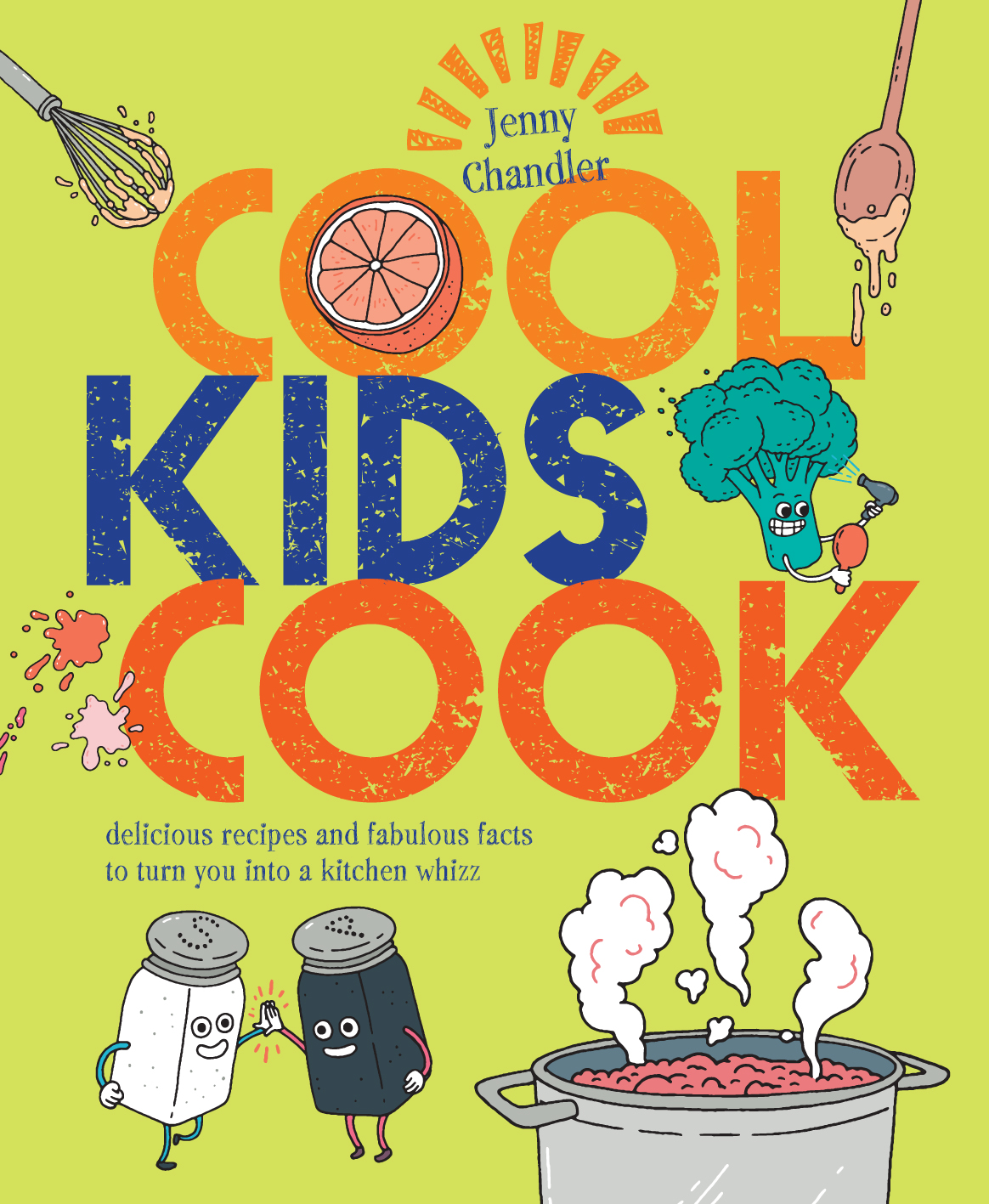 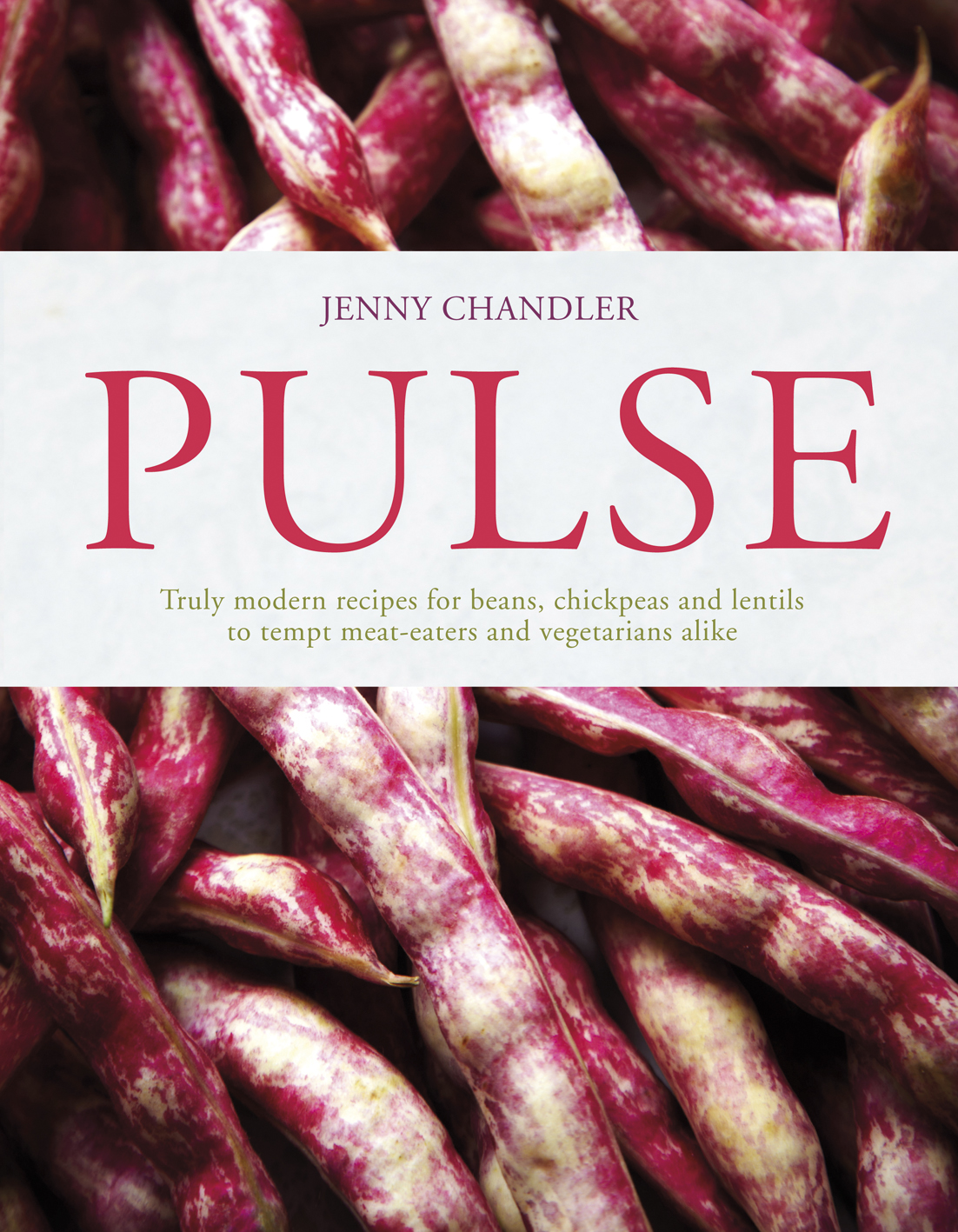